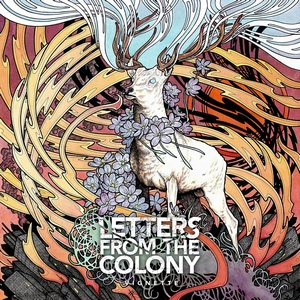 There’s not quite as much risk-taking in the metal world today as there should be. Young bands emulate the sounds that came before them, hoping to grasp onto their target audience, while veteran acts don’t want abandon the fans they worked so hard to gather. It’s understandable and makes perfect sense, given the shifting marketplace of the times. But that’s also why releases like Vignette should be championed for the role that they play in all of this.

A young Swedish band with only two previous EPs under their belt, Letters from the Colony managed to ensnare label bigwigs Nuclear Blast for their debut, and once Vignette is listened to as a whole, it’s quite deserving of the attention. While there are some clear points of reference to the Meshuggah/Textures djent-friendly sound, with polyrhythmic structures and math metal elements, it has much more going on. Death metal intensity swirls around the band’s heavier moments, injected with technical sprinklings and progressive trimmings. But just when you think you have the band nailed, they go ahead and add in dreamy, atmospheric segments that feel more post- or shoegaze-y in nature to switch things up. While it could end up a sloppy mess, on only their debut album, Letters from the Colony already seem to have a handle on lining up solid transitions between ethereal and demonic. Opener “Galax” sets quite the stage for the album, with a serene opening that quickly erupts into polyrhythm madness and frantic riffing and blastbeats. Melodic interludes and trippy/space-y diversions never hurt the flow of the track, in fact enhancing it to showcase the dynamics of the band. One side never dominates the other – instead working a fusion of brutality and peacefulness as you move into the latter half of the album. While some tracks like “Sunwise” are more direct in nature, they make up for the lack of ‘zen moments’ with pure bludgeoning.

An all-around impressive debut from Letters from the Colony, who prove that they can take a slew of today’s modern influences and set them up in a fresh direction that escapes easy classification. Vignette is simultaneously a scorcher and reflective effort, and a confident display of potential for this emerging act.

Letters from the Colony – Counting Down to Terminus