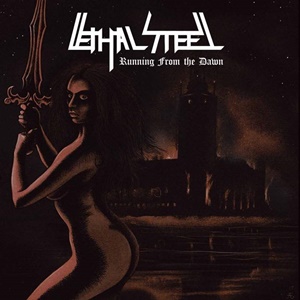 In the career of Sweden’s Lethal Steel, it’s been about quality over quantity of releases. Their debut demo in 2012 had a small fifty copy release, in anticipation of going to festivals like Muskelrock and the Sweden Rock festival. They signed with High Roller who issued their debut full-length Legion of the Night in 2016 – setting the stage four years later with this four-song EP Running from the Dawn. Various lineup changes stalled momentum, the band gaining lead guitarist Isak Rosemarin and rhythm guitarist Valentin Papp, but the quintet appears ready to go all guns blazing into the stratosphere with their songwriting and output.

Intertwining a mixture of traditional, true, and melodic/power influences from the early generation of European and American acts who paraded their wares during the 70’s and 80’s, Lethal Steel possess that type of edgy style that focused on racing guitars, catchy riffs/hooks, and powerhouse melodies bringing it all home. Iron Maiden and Judas Priest would be two obvious aspects to key in on – along with Accept, The Scorpions, and a bevy of early 80’s influences from Sweden and America – when you check into the twin guitar heroic aspects, steady rhythm section activities, and soaring, confident range of singer Viktor Gustafsson. Including a Swedish sung track with “Ge Allt” is brilliant, showcasing their multi-lingual switch up capabilities, probably the speediest of the four cuts on display – while the final track “City of Sin” is more of a mid-tempo send up that you can imagine the unison, synchronized stage moves coming out based on the spider-web musical twists and bluesy nature of many of the melodies. Right down to the older-style production/tone aesthetics and the darker, mysterious cover art, it’s evident that these gentlemen embrace and live for heavy metal on all fronts – unafraid and not apologizing for their stance.

Running from the Dawn will hopefully lead to a quicker turnaround for the next full-length – as Lethal Steel deserve to be touring globally and showcasing their heavy metal sound to a bigger audience.