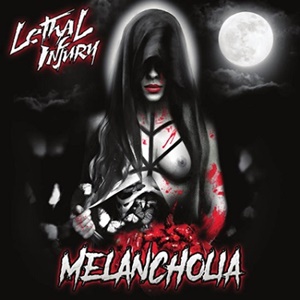 This scribe’s affinities for European thrash started in the teen years after discovering Bay Area bands and expanding horizons to Germany and the UK. Belgium became another early entry in that mix thanks to Cyclone and their 1986 release Brutal Destruction on Roadrunner Records. Hot on the heels of upstarts Evil Invaders, there appears to be a new crop of artists intent on pushing thrash again to youngsters- which brings us to Lethal Injury. Together since 2015, releasing a four-song demo that same year, and finally securing a steady drummer last year (Arthur Loobuyck) – they sign with WormHoleDeath for their first full-length Melancholia. And after a few spins, it’s a veritable stew of melodic thrash with death/extreme inflections strong enough to develop a wide array of appeal for the underground (and above).

What’s hard to ignore immediately on tracks like “Mothman” and “Scream Burn Die” is the raspy, venomous bark vocalist Rambo Exodus (real name Kevin Van Eeckhoutte) executes- mirroring mentors such as Alexi Laiho against Mille or David DiSanto (Vektor). Musically the quintet fluctuates between mid-tempo hooks and shifts and speedier fare, never forsaking the occasional gallop or melodic injection from the guitar department to give you an aural catch point. Some of my favorites occur in “Denounce” (serious Bay Area thrash meets Iced Earth swings here) and the darker twists to “The Downward Spiral,” where bassist Josha Pylyser gets some instrumental spotlight during the back half of the song. The title track appears in two parts at different spots for the track listing – the latter a reflective instrumental that’s very calming to set up the epic closer “Veiled Woman of the Black”, a seven-minute plus effort featuring everything from blast beats to semi-tribal tempos, progressive movements, tremolo octane blackened segments, and a tranquil march to conclude the proceedings.

The risqué cover may create controversy in some parts of the world – but it doesn’t detract from the seriously ripping riffs, intensity, and raspy vocals Lethal Injury deliver track after track. Melancholia combines the 80’s thrash benchmark aspects with a current death/blackened potency to separate themselves nicely from the hordes.