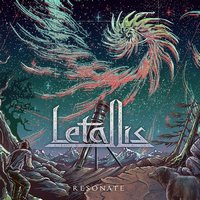 When you hear the term, “one man band,” there is a tendency at this point to associate it with black metal. Not that it doesn’t happen elsewhere within metal, but the number of one man black metal outfits at this point is starting to skyrocket. That being said, Letallis returns with a second album, Resonate, almost seven years after their initial release and are at this point, also a one man band. But this NYC outfit isn’t black metal, its progressive death metal with a real knack for melody.

Jake Calonius does practically everything here, even most of the recording process as well. You’d never know this was a one man show by the sounds of things. The only thing holding it back ever so slightly is the quiet production, but for a self-released affair it can’t be judged too unfairly. The sound of Letallis owes much to the overseas community, with some Scandinavian melodic death metal such as Dark Tranquillity and In Flames being two easy relations. The star of this album is certainly the guitar. Each track practically bathes in gorgeous melodic leads and riffs, which move from the thrashy and upbeat, to the solemn and introspective. Some highlights include the sprawling melodies of “Viridian,” the crunch of “How Vast?,” and the airy closing title track. There are also some well done acoustic segments that add to the atmosphere of the album.

If there’s one (small) weakness of Resonate, it’s the length. At 68 minutes, it’s a lot to take in with one sitting. Other than that, Resonate is an excellent piece of progressive death metal. Resonate is currently available for a “name your price” download on Bandcamp, so there’s no reason not to give this one a shot. Let’s hope Calonius is successful in finding some live players, to take this one out on the road soon.