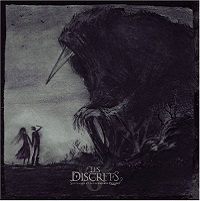 Wisely paired with the new Alcest, Septembre et ses dernières Penséesis the full-length debut of French trio Les Discrets, who feature in the ranks former members of the now-defunct Amesouers, who were led by Alcest mainman Niege. They’re all intertwined, you see. And because of the incestuous nature of the three projects, there is the majestic, exploratory trajectory to Les Discrets just like there is for Alcest and there was to Amesouers. In fact, this just outpaces the Alcest’s recent Écailles de Lune. It’s that captivating.

Falling under the metalgaze moniker, Les Discrets employ a healthy variety of acoustic guitars and lush atmospheres to get their point across. When blanketed by the bleak, oppressive scope that hovered over Amesouers, there’s multiple striking moments that warrant repeated listens. Just check out the sprawling approach to “Song for Mountains” or all-too-brief, yet near-godly title track, a song with some of the finest acoustic guitar plucking this side of Agalloch.

When the band opts for more distortion-laden avenues, the results are nearly as alluring. The shimmering “Chanson d’automne” has a dark pulse that offsets the spacious acoustics, while the double-bass driven “Les feuilles de l’olivier,” gradually becomes more of a shock to the system as the album falls into its latter stages. “Svipdagr & Freyja,” is another gem (think Eternity-era Anathema), and album closer “Une matinée d’hiver,” ends things on a surprisingly cheery note as singer/guitarist/mainman Fursy Teyssier and female vocalist A Hadorn gently shadow each other. Magnificent.

There is simply no way Septembre et ses dernières Pensées will not reach cult status. This album should do for Les Discrets what Souvenirs d’un autre mondedid for Alcest back in 2007 and by that, we mean lavish critical acclaim, underground recognition and a new-found set of expectations come next album. We’re not even a quarter into the new year and Blistering will gladly pin this as an Album of the Year candidate. Utterly recommended.