Leprous – Coal (Inside Out Music) 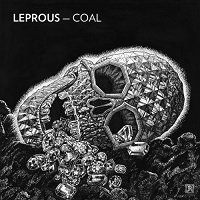 Impossible for Norway’s Leprous to not learn anything as Ihsahn’s backing band. Aside from his unparalleled musical abilities, Ihsahn has developed into quite the composer during his post-Emperor days, essentially becoming this era’s master of disharmony. Leprous might not have any black metal underpinnings like their ever-popular mentor, but their progressive repertoire continues to expand by the mile, this time with their fourth album, Coal.

The band’s 2011 Bilateral release was lauded for its cross-blend of actionable prog and accessible vocal lines, a lot of which has been built upon here. Singer Einar Solberg might initially come across as a bit too pipey for the regular metal throng, yet his chorus work on “Chronic” is undeniable – he’s like Yes’s John Anderson, just with a more European flavor. Solberg is given a lot to work with in terms of finding vocal nook and crannies, which could be the primary reason why he’s oftentimes neck-and-neck with the band’s dexterous playing – just take a look at “The Valley” and “The Cloak,” a song that works in tandem with build-ups, restrain, and copious energy.

Ultimately, the slippery nature of progressive metal such as this makes it difficult to get a full and proper grip on Coal. While there are no illusions of unbridled accessibility, Leprous does make it easier in areas where certain bands would never dare to. And with so much going for this troupe, you’d have to think that the more they chip away at the predisposed, difficult notions of prog-to-the-max metal, the better they’ll be for it in a few years.