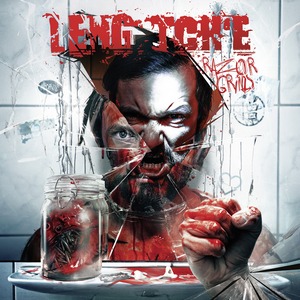 Perpetually one of the death/grind scene’s mid-level players, Leng Tch’e always seemed to suffer some due to an inability to stand out in a genre that prides itself on feral blasts, barks, and ramping brutality into the extreme. No fault of their own per say, but it was a line that they seemed to sit on. Not bad, but nothing that stood out either (aside from some of the humor of the band’s earlier output). With no output since 2010’s Hypomanic, Razorgrind comes across as surprisingly fresh.

With a title like Razorgrind (an ode to the band’s self-described take on grindcore), it’s the type of thing that can be thought of as a redefinition for Leng Tch’e. Long-term fans worry not, as the album starts off just the way that you might have expected it to with the furious “Gundog Allegiance.” Heavy on speed and groove – the band’s two previous strengths – kicking things into gear. But it doesn’t take long into the disc to realize that the band isn’t afraid to venture into some new territory with this effort. “Cibus” introduces some sludgy elements, including some strangely fitting clean vocals. Song lengths begin to move past the 1-2 minute mark about halfway through the tracklist, and this is where things get even more interesting. There’s still plenty to grind on about, but some progressive structures and moments of groovy melodies begin to stand out more (“The Red Pill” and “Guinea Swine”) and fully come to a head on the closing, 6-minute “Magellanic Shrine.” Here the band’s patented razorgrind exchanges blows with more melodic and slowly paced moments. Still rather heavy, mind you, but these moments really help to provide the band plenty of their own sonic space to occupy.

A triumphant return, Razorgrind takes what worked previously in the Leng Tch’e repertoire and brings a diversity that not only complements it, but brings effectively brings the band to the next level. This may be brutal and caustic material, but you’ll also remember what it sounded like once it stops playing. If you are looking for some grind that doesn’t simply follow the beaten path, you are going to love this.