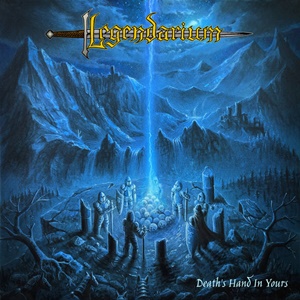 An international duo consisting of musicians from the Netherlands and Italy, Legendarium started in 2017 as the brainchild of Laurence Kerbov. Seeking out a drummer in Stefano Vaccari, Laurence tackles the vocals, guitars, bass, and keyboards – while being very productive on the recording front, as Death’s Hand in Yours is the group’s fifth recording (and fourth full-length) since their inception. While the main elements of this ten-track album come from a Scandinavian/melodeath prism, these musicians take influence also from traditional, folk, doom metal, power, and punk aspects to keep listeners highly engaged in a raw, dynamic experience.

The primitive tones plus primal production values add to the old school feel to these songs – you get an extra sense of distance/coldness that gives certain tracks like “The Demonic” as well as “…And All Shall Perish” that mystique we all appreciate in independent, underground artists. Laurence’s versatility takes hold during the second half of the record – “Black Magic/Touch of Evil” containing cleaner gothic rock/metal strains in the guitar department beyond his melodic, alternative melodies he chooses to employ on the vocal side with a killer sax solo for added dimension from guest Jared Archon. The folk metal charm comes out on “Arcane Magics of Ancient Origins”, while the epic overtones, musical intricacies, and punk/doom aspects appear on the longest cut, the 6:19 closer “The Ritual of the Thousand Skulls”, the chanting vocals midway through along with the crawling, bluesy lead break capturing the darker atmosphere of the arrangement accurately before picking up the pace for a rocking conclusion. German artist Timon Kokott encapsulates what listeners can expect from the colder, mountainous landscape cover art illustration to the hilt.

Incorporating a host of 80’s, 90’s and 2000’s influences across multiple genres, Legendarium may be onto something as varied as their sound can be. Taking melodeath, folk, metal, gothic, and punk influences into a veritable musical stew that hits the head and heart in focused fashion, Death’s Hand in Yours could be the golden ticket to your promised land if you enjoy the diversity of this genre.

Legendarium – Partake in the Ritual