Left Behind – Blessed by the Burn (Unbeaten Records) 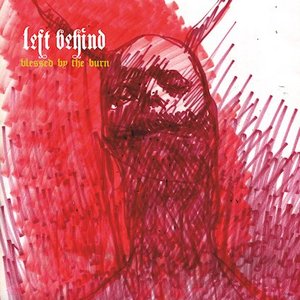 While there’s always a place for pure hardcore bands, there’s also a place for bands that take a hardcore ethos and give it an extra metallic coat of paint. Easy for hardcore to gel with many different types of metal – the easy ones like metalcore and deathcore, but they just don’t carry the same level of bludgeoning heaviness that other genres can provide. Left Behind proves this with their attachment to sludge and doom on Blessed by the Burn.

The burly, macho aggression of hardcore seethes through Left Behind and it pairs exceedingly well with more extreme elements. Chunks of death ‘n roll (think midperiod Entombed) and sludgy doom riffing (think Crowbar) find their way into the music, which never lacks for a viscous and utterly heavy tone. The riffs are further firmed up to the point at which you feel you might choke on them with mid-tempo chugs in stompers such as “Tough Love” and “Scarred Soul.” Sludgy riffs like those found in “Early Mourning” have some devastating qualities to them, with are enhanced by breakdowns that never fail to hit their mark. The vocals are equally heavy, but there is some emotional strain in them and allows them to feel a bit more human rather than just senseless barking. With the emphasis on feral heaviness, there’s going to be some loss on the melodic end, but it sticks to being a minimal problem when the riffs are this convincing in their brutality.

While Left Behind aren’t the first band to come up with a concoction like this, it doesn’t make Blessed by the Burn any less deadly. Those looking for something that crawls with monstrous riffs and plenty of rage to back it up will find exactly what they wish for.