Lechery – We Are All Born Evil (Bleeding Music Records) 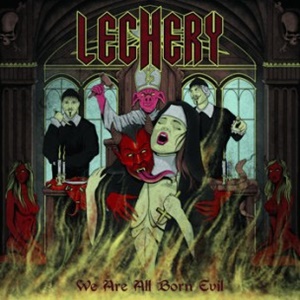 Featuring early ex-Arch Enemy bassist Martin Bengtsson (he played on the Stigmata album) in a guitarist/vocalist role here, Lechery deliver a traditional form of heavy metal reminiscent of the 80’s heydays for their third full-length We Are All Born Evil. Considering the six-year layoff between records as On Fire came out in the late summer of 2011, the quartet had plenty of time to refine and craft new material – hopefully developing hooks, riffs, and songs that stick and stand up to their heroes.

You immediately notice that Lechery favor a Teutonic stance in terms of catchy, mead-hall style choruses and culturally attractive twin guitar parts – including those melodic, harmony refrains that get crowds singing along in unison. It’s fair to say that Accept circa Breaker through Metal Heart factor heavily into the verse/chorus/instrumental sections for “Breaker of Chains” and “Let It Out” – synchronized headbangers will unite at the tasty riff combinations and potent rhythm section action (the latter containing a riff before the lead break that could be an “Up to the Limit” twin). Preferring a mid-tempo stance over breakneck speed and flashy acrobatic musicianship, the band appear confident in standing up for the tenets of heavy metal, living in that Dream Evil/Iron Savior back and forth chorus work for “Sacrifice” while rearing back for some highway guitar cruising fare on closer “Tip of the Whip”, again featuring a cool half-time, almost folk-ish instrumental twist. Martin as a singer has adequate attitude in his mid-range, but won’t ever be mistaken for the upper tier, powerhouse vocalists of the genre. He settles into his almost-quasi Hansi/Blind Guardian role throughout the record, making his point right out of the gate for “Heavy Metal Invasion”, passionate yet shrill in spots. It’s all good though as the unison chorus elements more than get the words across for even the newcomers to treasure.

A marked improvement from their last effort (although the cartoonish cover art leaves a touch to be desired), We Are All Born Evil will go down a storm with the denim patch, jean jacket brigade – or the 35 and older contingency who want a reminder of their youth.