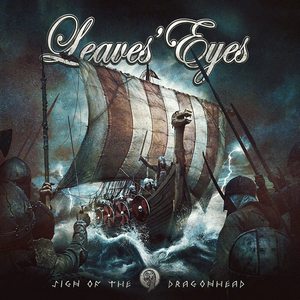 Veteran bands are often in a tough spot when they lose an established vocalist, particularly one with the presence and power of Liv Kristine. But despite some tumultuous times in early 2016, Leaves’ Eyes soldiered on. Recruiting new vocalist Elina Siirala (Angel Nation), the band rallied themselves and journeyed through numerous tours in the last two years – leading us up to Sign of the Dragonhead, Leaves’ Eyes first full-length with Siirala, and one that captures their long-standing evolution and steers it into even more exciting territory.

Outside of these more ‘serious’ cuts, there’s also an element of fun that’s a perfect carryover from their live performances with “Across the Sea” and “Riders on the Wind” sure to put a wide grin on fans’ faces even on the first listen. In the same way, “Shadows in the Night” will capture many fans’ interest with its bouncy and upbeat vibe and downright glorious chorus. On the folkier side are the more melodic and ballad-esque “Fairer Than the Sun” and rousing instrumental “Rulers of Wind and Waves,” and look no further than “Völva” if you need some evidence of what Siirala brings to the band in terms of her sheer vocal performance and charisma.