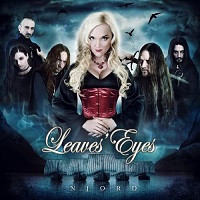 Quite the flurry from the Leaves’ Eyes camp in the last several months, eh? Njord (the band’s third full-length) is following up the We Came With the Northern Winds/En Saga I Belgia DVD and the My Destiny EP, which means the Liv Kristine-fronted combo is hell-bent on flooding the market or they like things in bundles.

Arguably the first Leaves’ Eyes that sidesteps their oftentimes over-the-top lyrical slant, Njord revels in symphonic Euro metal glory, creating some satisfying moments and left-turns that show the band less focused on Kristine’s vocals and more on their highly cinematic and melodic sound.

Indeed Njord contains some of the band’s most memorable cuts to date, most notably “Emerald Island,” a quasi-power metal romp, complete with luscious melodies from both Kristine and the guitar department. Lead single “My Destiny” is more a direct hit than it should be, in spite of backing vocalist Alexander Krull’s cheesy shouts during the chorus, while the melancholic “Scarborough Fair,” bouncy “Irish Rain” and dramatic “Ragnarok” all emerge as striking numbers, keeping in tune with the more metallic, less fluff angle of Njord.

Not like we weren’t into Leaves Eyes’ earlier output, but Njord is far and away the crown jewel of the band’s career thus far. Something had to of clicked along the way (there are three new members – could that be it?) or maybe it’s a case of gradual refinement. Either way, Njord should do more for the band than any vivacious outfit Kristine could don. Not like we’re complaining about those either…