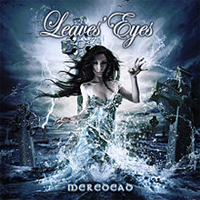 Symphonic metal isn’t merely flowery keyboard-laden passages and overblown theatrical choirs that kick into Rhapsody of Fire-like high gears. There are a few bands who also remember to throw down ear-pleasing melodies and retainable songs. Take the German/Norwegian quintet Leaves’ Eyes, who are on their fourth studio album Meredead and are ready to challenge the boundaries of the genre by continually incorporating violins/cellos and other classical movements in more of a Therion side-by-side metal approach.

“Velvet Heart” for instance, features a ripping wah wah solo from guitarist Sander van der Meer against the chiming bells and straightforward mid-tempo rhythms, as vocalist Liv Kristine alternates between comfortable verse melodies and more expansive, operatic-like bridge and chorus work. Adding to their Norse mythology mystic in songs like “Krakevisa” and “Nystev,” where bright folk instrumentation gives the band that much more distinct appeal, carrying your thoughts to the Middle Ages while the conventional guitar, bass and drums never forsake the metal base.

In another twist, Leaves’ Eyes cover the Mike Oldfield classic “In France” with another folk/ symphonic metal interpretation, alternating between sparse instrumentation during many of the verses and then building the dynamic tension for the instrumental sections and choruses. Overall you won’t hear as many Alexander Krull death roars compared to previous albums, as I believe Meredead’s focus is more on being an alternative to what you’ve come to expect through the years for the band.

Highlights include the Thin Lizzy harmonics within the title track and the military march opener “Spirit’s Masquerade.” Leaves’ Eyes aren’t my cup of tea for every day listening, but they certainly know how to play for atmosphere and genre blending ability.