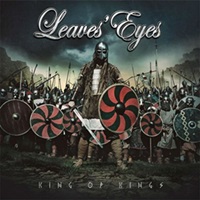 Many artists would love to get one decade long run with the same band – in the case of vocalist Liv Kristine and her keyboardist/husband Alexander Krull, they’ve been able to strike the iron twice for Theater of Tragedy and Atrocity separately, plus the current act under the radar lens, Leaves’ Eyes. Gaining a new second guitarist in another Atrocity recruit with Pete Streit, King of Kings as the sixth studio album showcase the symphonic metal quintet spreading more dynamic wings while keeping the trademark uplifting operatic elements and catchy riffing/keyboards that make the genre so far reaching in appeal.

Those who desire the commercial numbers that allow Liv’s dual angelic and operatic range to shine with supporting symphonic/choir flourishes will treasure “The Waking Eye” and “Sacred Vow” most, probable to stay in the set lists for quite a while. Folk elements enter on a couple of significant tracks, the closer “Swords in Rock” sure to get some jig action due to its infectious musical hook and supplementary strong, mead hall chorus while “Vengeance Venom” contains those Celtic harmonies in an acoustic/electric battle for the ages that would appease the long lost Gary Moore and Phil Lynott for their legacy. Alexander’s natural growls offer the right aggressive contrast in spots for the moodier “Halvdan the Black” as well as the 7:30 majestic epic “Blazing Waters”.

Where the band succeeds against other symphonic metal bands is their focus on moving arrangements without too much overblown excess. Yes there are added chimes, bells, and whistles so to speak, but it’s not at the determent of the proper instrumentation and flow – the 11 tracks giving the listener a solid record under 45 minutes instead of exhausting the consumer in today’s ‘max the CD capabilities’ outlook. Sure the battle covered art may steer the uninitiated into thinking this is power metal, but rest assured Leaves’ Eyes is still firmly involved as a leader of the symphonic metal movement. And the lyrics dig into Liv’s Norwegian heritage, covering the sagas of the country’s first king Harald Fairhair in a personal manner for a concept record.

Nightwish are still the undisputed leaders, but Leaves’ Eyes continue to shine because of their ability to properly infuse a multi-genre nuance to their songwriting, and King of Kings keeps the band’s arc on the rise.