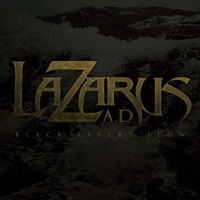 Once the retro movement came barrelling down the street, it was all over for thrash metal. Yeah, the vanguards of the style (i.e. Exodus, Testament, Death Angel, etc.) have done their job in holding down the fort, but the number of quality young bands

playing thrash can be counted on one hand. For every appealing band of the style, there’s at least 30 decked out in high-tops and ripped jeans, borrowing every old Forbidden riff they can find. It’s infinitely more exciting to have a band this uninterested in rehashing the past like Lazarus AD, who have a stormer on their hands with their sophomore effort,Black Rivers Flow.

Like their 2009 debut The Onslaught, Black Rivers Flow hunkers down with heavy, forceful riffing with an emphasis on monster grooves – just check out the beating handed out during “The Ultimate Sacrifice.” As simple as the band’s sound is, there’s plenty of twists and turns of the neck-snapping variety, specifically on the speedy “The Strong Prevail,” and chunky “Casting Forward,” a jam that also boasts a radio-ready chorus, but is hardly sticky-sweet.

Not really a dud here, with the melody-driven (and just rocking) “Light A City (Up In Smoke” getting nods for being the best song

of the bunch, although “Beneath the Waves of Hatred” and climatic album closer “Eternal Vengeance” are of similar value. Hats off to the band for having the gall to turn what appeared to be a standard ballad with “Eternal Vengeance” into a maelstrom of dive-bombing riff-action at the song’s conclusion.

Easily one of the best prospects the thrash metal scene has come across in years, Lazarus AD have managed to exceed expectations with Black Rivers Flow. From top-to-bottom this is ace, and should be the barometer for modern thrash metal going forward. This puts the Bonded By Blood-worshipping, denim-loving, bereft-of-creativity retro thrash movement to shame. Get this.