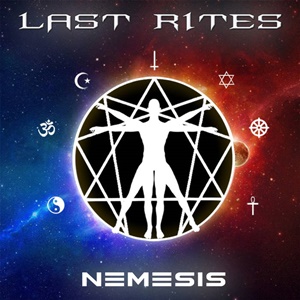 Slugging it out in the Italian scene since 1997, Last Rites are a thrash/death based quartet who have released numerous demos and albums, hitting a productive streak as of late given that this fourth full-length Nemesis comes thirteen months after the prior Unholy Puppets record. Being my first exposure to the group, it’s fair to say that they have a cohesive grasp of executing their ideas, mixing up the mid-tempo to faster riff action with that aggression and brutality that can meet approval for death fanatics.

The guitar play has this crisp slant that tickles the body for massive movement – check out the opening sections of “26.04.86” or the Bay Area-ish follow up “Ancient Spirit”, which has a touch of that mystical blackened fierceness during the chorus due to blasting/trilling combinations. Because of the strong musicianship present, there are times where the bass ethics can give Last Rites a third progressive weapon for dynamic interest – “Fallen Brother- Glory to the Brave (outro)” especially showcases this during the first instrumental break. Often the band seem comfortable throwing in a progressive riff that builds into a subsequent down to earth passage, insuring hooks and melodies even as the advanced playing or tempo changes take place – comparisons abound to latter period Death or all periods Coroner in this regard. The exotic twists keep the otherwise chugging “Realm of Illusions” a later highlight, listeners sure to connect to the relentless double bass kicks and furious stop/start riff action. Another difference maker comes up in terms of guitarist Dave with his main vocals. His ability to go from raspy screams to low growls is rare, reminding me of everything from Chuck Billy during the Demonic days to the mighty Ron Royce of Coroner.

It’s surprising that Last Rites hasn’t grabbed the interest of a decent metal label based on this set of songs – Nemesis rivals what we are hearing from most of their cohorts in thrash/death. Outside of a computer graphics cover that seems more appropriate for Rush, this is a high-quality band keeping European thrash/death alive and kicking.