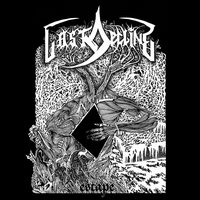 With all of the cross pollination of the metal scene (particularly black metal), it seems almost strange when going through the sea of new material and find something so easily identifiable. Something that seems pure – not needing to be bogged down by 15 different genres and descriptors in order to get their point across. Last Decline bring you unadulterated black metal, just as you’d expect.

The opening paragraph is not meant to be a disservice to Last Decline at all. Listening to Escape is honestly a bit refreshing compared with plenty of their contemporaries. There’s no post-metal nor “atmospheric tendencies” to be found (that that there’s anything wrong with those things of course), but the band takes their influences from the purist of aesthetic. Thankfully they also have the good sense to keep things varied and dynamic, instead of just blasting away and firing off tremolo-picked melodies to hammer home their point, though “Death Takes Me Away” and “Spiritual Clarification” do this effectively. Escape moves from moments of those feelings to more brooding and depressive corners. “Last Decline” is laced with darkness and gloomy vibes, sticking with more mid-tempo churning atop of the downright sinister blackened rasps. But the near ten-minute “Blind Mans Dream” takes the cake with this, spacing things out while keeping the listener intent about what may lie around the corner.

Eloquently done black metal that manages to keep things interesting by providing a needed dynamic in tempo, Escape is proof that sometimes less in indeed more. Depressive and dark material that relies more on the strength of its writing than that of trying to go for the wow factor.