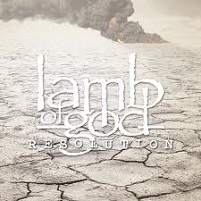 Perhaps the last “big” metal band America will produce in a long time, Lamb of God is at the stage in their career where they can comfortably put out albums at their own pace, totally oblivious to the fact that they peaked a long, long time ago. A one-trick pony if there ever was one, the band’s pure-bred American metal style has been striking a crowd with the adolescent/teenage crowd (ages 13-21) for over a decade now, and while there’s still some ever-present angst, a lot of it feels worn-out on their seventh album, Resolution.

As has long been the case with LoG, their tendency to frontload their albums once again bites them in the butt. Case in point, the title track “Resolution” is as brash as anything the band has ever done, with guitarists Mark Morton and Willie Adler going full-bore with an array of zesty thrash riffs. It’s a sure-fire live opener. Lead single “Ghost Walking” retains the quasi-Southern groove most recently heard on “Redneck” (from 2006’s Sacrament), while the tightly-wound “Guilty” and “The Undertow” take the baton from 2009’s compact Wrath.

Randy Blythe who is infinitely more understandable than he was when LoG first hit the scene, but serves no other purpose than window dressing. There’s no mammoth chorus here, and the rambunctious “Cheated” (the band’s stab at an all-out punk song) and “To the End” blend into the LoG tapestry almost at will. And the album’s bloated 56-minute running time should be condensed down to a solid 35-40 minutes in order to maximize the album’s peak cuts. Instead, the lull and sameness of the album’s back-end is a matter of “heard it all before…for the seventh time.”

Gripes aside, Lamb of God are arguably the best at what they do. WithResolution, the band makes no noticeable strides, but is able to pad their live set with the album’s front half. They’ll never be Pantera, yet they’re still able to stave off Shadows Fall and Killswitch Engage. And when you really think about it, they’re probably the right band to be carrying the American metal torch. We’re still light-years behind Europe and Scandinavia, obviously…