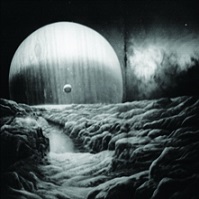 Since forming in 2007, Lake of Blood made great progress on developing their robust and transcendent sounds. “He Who Becomes” and “In Wells of Shadow” were previously released as an EP titled The Burial Grounds Sessions, reinvigorated and rerecorded for Omnipotens Tyrannus, the second full-length album by the Los Angeles metallers Haagr (vocals), Xsithis (drums), Samael (guitars), Nordic (guitars), and Krajavic (bass); the latter three are also in a similar band called Doctorshopper.

Omnipotens Tyrannus is an entrancing album, mesmerizing in passages adorned by sullen ambience of instrumental white noise, hypnotic in recurrent racing riffs and pulsating rhythms in the unhurried compositions. Through the unobstructed rumbling that persists for measures on end, after several minutes into the lengthy songs, it seems like the guitarists’ fingers ought to be bleeding. Lake of Blood’s brooding style of metal invites listeners to fully isolate themselves in the dismal solace of the echoes and vibrations, to transcend into the lullaby-like intros, and then be shaken by the boisterous coordination of cues.

A particularly excellent model of these systems is “Tyrannus,” where the melodic intro decrescendos to silence abruptly broken by an acceleration of tempo in sequence of guitar, second guitar, bass, percussion, and vocals, creating an intense canon. Throughout Omnipotens Tyrannus, Lake of Blood blends traditional music techniques like counterpoints, segues, and drones into a funeral-doom design. Strenuously hollow vocals and mournful howls in contrast with an instrumental rawness so dense the resounding hums nearly engulf one another, but not so much the sound becomes over-distorted, forming treacherously dark tones.

Omnipotens Tyrannus is perhaps the finest work by Lake of Blood yet. While they have extended beyond their threshold in manners of balance and variation, there still remains a thirst for more lucidity in vocals and inclusively sharper pitches. Nonetheless, the band has captured the torrential and atmospheric qualities they’ve been aspiring for.

Lake of Blood on Bandcamp