Lair of the Minotaur – Godslayer EP (The Grind-House) 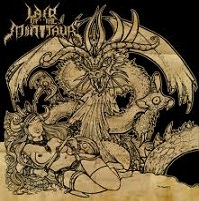 Recorded as means to commemorate Chicago savages Lair of the Minotaur’s tenth anniversary, the Godslayer EP is a quick two-song free-for-all of bludgeoning, no frills metal that is sure to help their fanbase bide some time before their next full-length hits (whenever that will be), which in turn, makes DR wonder aloud why more bands don’t follow this practice, as in, putting out two songs, making sure they’re heavy and good, and getting out of the way for a  bit, but instead, a lot of underground bands feel the need to write albums longer than 40-minutes, a number sometimes past the limit of our concentration, but both “Godslayer” and the massive “The Black Heart of the Stygian Drakonas” serve their purpose in celebrating ten years, ten years of playing small clubs, traveling in smelly vans, and doing their best to give Chicago metal a good name. Mission accomplished.

Lair of the Minotaur official site