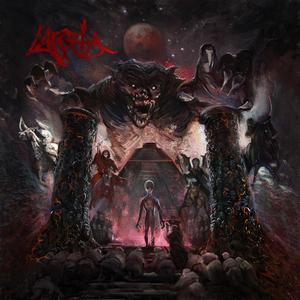 Talk about knowing your audience! The artwork of Lacerta’s self-titled, sophomore effort has just about anything a death metal fan could imagine: huge beasts, skulls, aliens, cosmos, cult-ish followers, and even what appears to be angels & demons. Bottom line is that there’s lots for a keen eye to observe within the cover art, and that same statement can be applied to the music behind it – in terms of both brutal and technical means.

Originating in 2005, these Tasmanian gents have previously delivered a full-length back in 2010 (produced by Psycroptic’s Joe Haley) and Lacerta continues with the band’s self-described approach of ‘brutality and brains.’ This of course meaning that you aren’t going to hear the usual, more tech than death approach of many newer acts, but a technically-motivated affair that still knows when to double-down on the brutality button. Featuring a production that’s well-suited to this end, the guitars frequently dive into intricate waters yet retain a level of visceral carnage. Complex riffing combines with some faster tempos (see “Incubation of Tyrants”) but they also keep things more melodic at times (“Void of Shadows”) before going in guns-blazing. Each track has a few moments where you’ll equally enjoy the riffing for its memorability as well as its technical flourish. Tempo shifts are par for the course, but the band doesn’t go berserk with them, sticking with the idea that they are designing songs and not technical displays. Likewise the vocals help to ramp up the brutality, and fuse well with their barked and searing approach.

A technical death metal album that equally serves those in for the intricacy of the riffs as well as those just looking for some scathing brutality, Lacerta is solid from start to finish. Being 7 years apart from their debut, hopefully they’ll snag a larger audience with technical material being more fully en vogue now.