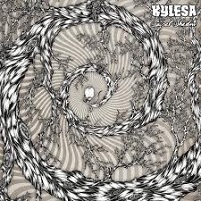 Wasting little time after last year’s totally killer Static Tensions, Georgia’s Kylesa return with the not-as-awesome Spiral Shadow. Whereas its predecessor was practically gift-wrapped with a handful of those grueling, yet achingly melodic riffs, Spiral Shadow has more of a concerted flow to it, and for once, it’s hard to pin down where this one is going – it’s all over the map. Absent is that magnificient, coy melodic tremor the band had going on its predecessor and breakout Time Will Fuse Its Worth, and while it’s not troubling per se, it does kick Spiral Shadow down a few pegs.

The core of Kylesa’s sound is still very much grounded in the dual vocal attack of Philip Cope and Laura Pleasants, both of whom pick their spots wisely, especially Pleasants on “Tired Climb,” and the title track. Cope, on the other hand, is not utilized as much, as his shouts (which sound like every other Joe-Blow stoner/doom vocalist) usually fall to the wayside on the Arcturus-sounding (yeah, we said Arcturus) “Cheating Synergy” and “Drop Out.”

“Don’t Look Back” emerges as the pick of the litter, as its the homespun, earthy type of jam that has enabled the band to stick out amongst their stubborn contemporaries. As such, when Kylesa goes the melodic path, and Cope and Pleasants are out and about, trading vocals, it’s when one takes a step back and things, “Why can’t all Kylesa jams follow this pattern.” Obviously, they do not, and the back half of the album follows in a dark, jam-oriented space that is neither here nor there.

Bands cranking out albums in consecutive years comes with a negative connotation these days, primarily because everyone is so used to the usual album-tour-record-release cycle that usually produces an album within in two years. In the case of Kylesa, their dogged road efforts and sterling reputation warrants new music, and if Spiral Shadow does prove anything, it proves that the band probably have more tempting material out there on the road somewhere…