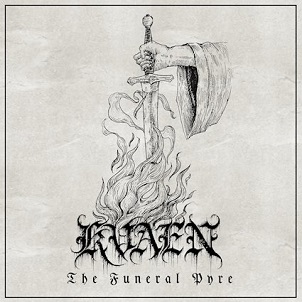 Kvaen, the one-man project of The Duskfall and Autumn Death’s Jakob Björnfot, is like Deströyer 666 and Dissection speeding down a highway on their motorcycles, each armed with scythes, rifles and the lot. (They’re wearing leather, naturally.) They ride into town, head to the nearest bar, wreck the joint — only after getting onstage and playing some rather fierce and unrelenting black metal with a melodic twist. That’s how it would go down. And no one would forget it.

Björnfot wisely enlisted some sessions drummers to perform on his The Funeral Pyre debut, which immediately saved the thing from basement BM and/or drum machine BM purgatory. Instead, the production is kept slightly above ’90s standards and it’s largely to the benefit of Björnfot’s guitar tone and riffs. He’s naturally in the throes of Swedish black metal riffing — the melodies are more prominent and there’s more clarity rather than the propensity to let things go sideways. He burns through these songs; rather, his riffs burn through these songs, notably on the anthemic opener “Revenge By Fire” and the Dissection-faring “Yee Naaldlooshii,” which is the type of song Naglfar has spent years trying to write but to no avail.

The not-so-subtle nods to mid-’90s black metal are what push The Funeral Pyre over the top. Whether Björnfot is injecting savory clean channel riffing (“The Funeral Pyre”), working himself into a (black) lather with triumphant melodies on the Watain side of the fence (“The Wolves Throne”) or rushing into a cataclysm of blasts (“As We Serve The Master’s Plan), The Funeral Pyre is everything great about Swedish black metal rolled into an eight-song debut. Never underestimate the power of one.