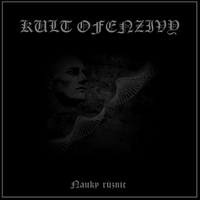 The word “kult” or “cult” or “kvlt” in black metal is pretty ubiquitous. It’s the favored term of bands looking to cement their status in what is metal’s most treacherous social pecking order. To be certified as “kult” or “cult” or “kvlt” virtually prolongs one’s career…or keeps it out of the message board firestorm. (These fancy-pants hipster black metal bands are probably having a really difficult time, eh?) To that point, Kult Ofenzivy, which stands for “cult of the offensive,” are without question, the cult type, yet their relatively upright and general take on black metal probably won’t push them beyond soft chatter and the occasional name-drop.

Hailing from the Czech Republic, the band engages in the raw, no-keyboards, no-atmosphere sound that was so divisive when the second wave of black metal hit Norway in the early 90s. As in, bands playing this style were far more true to the cause than the ones who employ keyboards and the like. But, keyboards and the occasional atmospheric bit would probably do a band like Kult Ofenzivy some good, for the run of the songs on Nauky ruznic portray a band with little in terms of riff variation or dynamics. Essentially, it’s the same smeared chord runs that are all over any classic-era Marduk or Darkthrone album.

A ferocious cackle, yes; undeniably true to the cause, indeed; however, the bulk of Nauky ruznic, in its non-spacious 25-minutes lacks the brand of ice-bitten charm needed to give BM of this type some flavor. Appropriately, the band is shrouded in mystery, which makes almost as much sense as them parading around in standard edition corpse paint. They’re just as faceless either way.