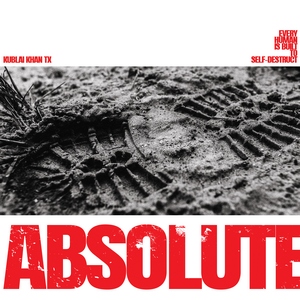 Given just a few seconds of describing what Kublai Khan sounds like, there’s an assumption that it’s a bit Neanderthal-ic in nature. The band’s hardcore-esque sound, after all, is built around stomping riffs and breakdowns that are simply meant to start a riot when they play live. It’s a vibe that’s solely based on aggression, but the band is simply so good at it, it’s hard to ignore.

There’s no subtlety or real ‘depth’ to be had to the band’s music. But the same could be said about a number of genres within metal or the greater music landscape. Kublai Khan is simply pulling out of the more primal and bestial aspects of humanity and converting it into musical violence. The band really never stops down for a second over the course of Absolute, acting more as a force of nature than anything else. Quite simply, it’s beyond angry. Matt Honeycutt’s vocals are gruff and in your face, and yes, the lyrics are a bit hokey in their machismo but they are nonetheless monstrously delivered. The riffs are thick and lumbering, the type that this particular fanbase hopes for, but it’s also not without a few interesting twists every once in a while. There’s the rumbling bass outro of “Self Destruct,” groovy melodies in “The Truest Love,” some addictively catchy stomping throughout “Beneath a Crescent Moon.” With only 26-minutes in length, the songs do their best to quickly cause destruction and get-out before tedium sets in – proving it’s better to be a spitfire about these things than to belabor the point.

Absolute is brutal, metallic hardcore. The type of thing you turn on when you need a bit of release from the strains of today’s society and just unload some anger. It’s by no means perfect, but it generates all the carnage that one could hope for in this style of music.