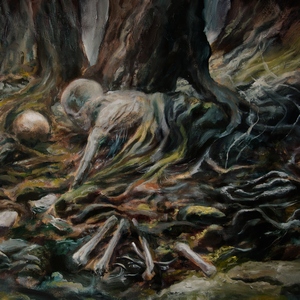 The grim, slimy tones of death metal are well established though a number of bands just simply can’t hit the right mark with them. But bands versed in the death/doom quadrant are familiar with that suffocating feeling, a piece that takes said dark tones of the genre and brings them further into the underworld. It’s a sensation that Krypts do an excellent job of capturing on their third release, Cadaver Circulation.

An air of unsettling atmosphere is what Krypts successfully conjure. It’s a bit of a refreshing one too, as they also manage to stay clear of the usual Incantation-esque vibes when it comes to their approach. The band operates at their best when they use funeral dirge tempos and really lay the atmosphere on thick – “Echoes Emanate Forms” has a few tempo changes but is utterly sluggish most of the time, which allows the band to develop a sense of horror and dread. “Vanishing” makes good use of this as well, sometimes feeling like a vortex of swirling darkness, bringing the listener ever closer into sheer gloom. That said, when the band is attempting to blast away, ironically it’s not quite as exciting. “Sinking Transient Waters,” for instance, serves up an opening charge but those hastier moments feel more akin to the rest of the death/doom legions. It’s done well, but doesn’t stand out quite as much as when they bring things to a crawl.

The palpable sense of dread and grim atmosphere is what Cadaver Circulation shine the brightest. While many similar acts rely more heavily on the death components, Krypts know how to make for an interesting dirge. But one can’t help but feel that if their more brutal side was just as exciting, it would make for a real zinger of an album.