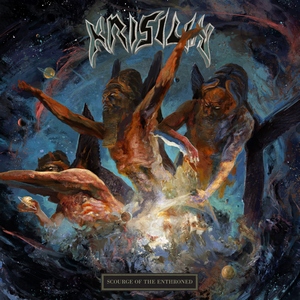 Long-time purveyors of hellish speed and unrelenting death metal, Krisiun is a band that can be read like an open book. Scourge of the Enthroned is their eleventh studio effort to date, with said number being a testament to how proficient they are at their craft. While Krisiun aren’t exactly going to turn heads with stylistic changes on this record (and nor should they need to), they’ve continued to dish out the brutality in ways that stay surprisingly memorable, even in regards to some of their previous works.

Krisiun have always been about whirlwind intensity and over the top blasting and speed, and Scourge of the Enthroned does truly indulge the fanbase in this regard. Of course, the opening title track builds into a slurry of chaos and aggression, reassuring the band’s uncompromising approach. But what comes as more of a surprise as the album continues, is the level of restraint the band employs at various moments. Follow up cuts “Demonic III” and “Stay the Prophet” will still attempt to knock your head off with brutality, but the tempos have a bit more variation, dipping down into slower speeds and heavier riffing to keep the tracks more interesting. Fear not, the frantic and dizzying guitar work still stands quite high as well, with the closing “Whirlwind of Immortality” and “Slay the Prophet” being some true Krisiun highlights. The solos are ripping throughout, and the occasional thundering riff, a la “A Thousand Graves” really aids the band in capturing the listener’s attention without forgoing their usual onslaught. What also helps the band this time around is a ‘leaner and meaner’ approach, in that 8 tracks in 38 minutes keeps the album zipping along with little slowdown.

On the surface level, Scourge of the Enthroned may seem like more typical Krisiun fare, but the tweaks in tempo and attack do allow the band to shine a bit brighter than usual. Being a band that could be found in the thesaurus under uncompromising, it’s also clear their trajectory hasn’t changed either. So in the end, this feels like bone-crushing death metal at its finest, but with some real long-term appeal to it.