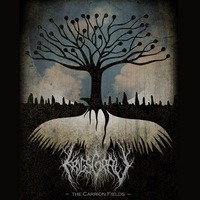 Tie-in American black metal, with nature, with nose-in-the-air song titles like “Spire of the Hunt” and “Cold Wounds of Virtue,” and automatically, it’s Cascadian black metal, right? It almost has to be. DR could almost feel the empty stare of thick, black-rimmed glasses upon having a cursory glace at the information that accompanied The Carrion Fields, but that’s why we listen to albums: To figure these things out. And as it so happens, Texas’s Krigsgrav aren’t Cascadian whatsoever. Dodged a bullet there…

A band now into its first decade of existence, Krigsgrav (which means “war grave” in Swedish) have an assured, mature feel to them. Their sound is primarily rooted in dark, semi-cult black metal, but the production is heaving and audible, pumping up the band’s well-timed melodic choices, of which are on display during the above-listed “Spire of the Hunt,” a lovely instrumental piece if there ever was one. It serves as the album’s real launch point, pushing elongated, but not less adventurous cuts like “Ghosts Among the Ashes” and the grim finale “In the Waning Light We Bleed” to melancholic, somewhat Scandinavian depths. Furthermore, the band demonstrates virtually no inclination to turbo-drop their black metal, a start contrast to the Cascadian bands, who often feel that by playing faster and more extreme will masque the noticeable flaws within their sound.

Krigsgrav probably sound a bit more like a Scandinavian band with obviously, a Scandinavian name, but that’s a good thing. A proper survival tactic in the American black metal landscape would suggest to bands that sounding as un-American as possible would be a prosperous, career-extending move. On The Carrion Fields, Krigsgrav do exactly that. Either way, consider this one of the year’s true sleepers.