Krepitus – The Eyes of the Soulless (Self-Released) 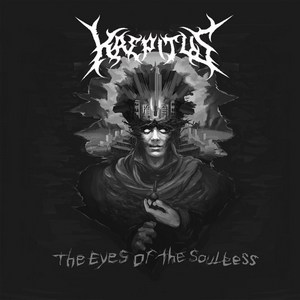 Mixing death and thrash, like most combinations, requires a bit of thought to make sure the pieces fit together. While death and thrash can naturally mesh, it’s all about that delicate balance to keep fans of both sides happy. Krepitus, newcomers from Calgary, fuse the best of both worlds on their debut, The Eyes of the Soulless.

Opening up with the lively riffs and thrashy intensity of “The Decree of Theodoseus,” there’s not much in the way of let-up as the album continues. Invigorating thrashy melodies blur together with more classically inspired death metal riff-giants like Death and Carcass, with the technical inspiration from today’s modern scene. It sounds like a lot to digest and while the album is certainly impressive on a technical level, it’s just a plain ole fun time. The frequently galloping thrash inspirations allow for some interplay between the two guitarists, who do an excellent job of layering up their riffs and complimenting each other. The leadwork is often stunning, and the melodies are rich with harmonized components. Standout track “Desolate Isolation” even has some old school Dark Tranquillity vibes (think The Gallery) in terms of the leads and overall feeling behind them. The type of album that is all but certain to bring a smile to your face the second it begins and keeps you gripped until the finale.

A case where the music keeps its vicious edge but the melodies are just as wickedly triumphant, The Eyes of the Soulless is one to check out for the death/thrash fanbase. For a debut to escape being easily pegged as “this style” or “that style” alone is worthy of a few kudos, but the musical precision that Krepitus is already employing gives an even bigger reason to check them out. A rock-solid start for these guys.