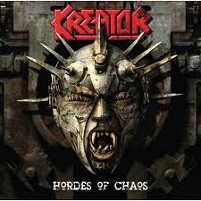 Not too enthused about having to give this an 8/10, especially considering how monumental and fresh 2001’s Violent Revolution and 2005’sEnemy of God were. Yet, here are Mille and the gang, back at it after a four-year layoff in between albums with Hordes of Chaos. A lot speedier than one would anticipate, Hordes of Chaos doesn’t assert oneself like its predecessors, nor does it enthrall, but it’s way better, heck, even annihilates any of this new thrash crap, so there’s your silver lining.

No Andy Sneap this time, which is not necessarily a bad thing considering how uniform his production jobs are starting to sound. A lively and raw production job sees drummer Ventor with a little more pop than usual and even Mille’s vocals crack and show no signs of processing. In fact, the singer

/guitarist sounds more pissed than ever, especially during the title track and the chorus of “Amok Run,” poor wordplay and all.

If one is deft enough, you should remember those charming melodies the band infused on songs

like “Replicas of Life,” “Bittersweet Revenge,” “Dystopia” and “Dying Race Apocalypse,” all of which kept Kreator’s thrash ante upped, but added a smart flavor that kept the songs moving and mobile. On Hordes of Chaos, there’s not as much, with only a few sparks coming up during “Warcurse” and “Demon Prince.”

More mid-paced numbers ala a “Ghetto War” or “Impossible Brutality” would have done the trick, and only “Escalation” and “To the Afterborn” approach those measures. It’s not like we haven’t heard Kreator go all-out, and that was in 1987. It feels as if Kreator is trying to keep up with all the baby thrashbands

and really, they don’t have to. They could pound those kids into dust with a sound groove number.

Had this been the album after the dreadful Endorama, we’d be going bonkers, but the bar is just too high for Hordes of Chaos. When you have two shining thrash moments of the millennium to your name and have had the fortune of being able to tour relentlessly off two measly releases, then you’re doing something right. Make no mistake – Hordes of Chaos is good, but if you missed out on Kreator’s other two outputs this decade, you either: a.) don’t know thrash or b.) are without the benefit of good taste. Take your pick.