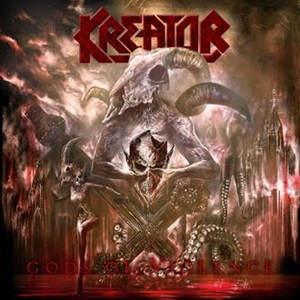 Thrash pioneers Kreator appreciate the popularity uptick they’ve received thanks to the second (and third) life of the movement. As younger audiences get indoctrinated to the fold, they not only discover bands of their own generational appeal (Warbringer, Havok, Suicidal Angels among them) but yearn to hear and witness the legends whenever they hit the stage in their favored territory. We all have our particular favorites if you grew up in the original crusade (Pleasure to Kill, Terrible Certainty, and Extreme Aggression pillars of Kreator’s discography to this writer), and even will spin an occasional 90’s outing like Renewal or Cause for Conflict when the need strikes for diversifying the catalog.

Since the 2000’s, it’s hard to dispute the upper tier quality of Kreator’s studio outings. Gods of Violence, the band’s fourteenth studio platter, is another example of turning up the creative energy and channeling things in the right directions for Mille and the boys. A logical continuation of more melodic nuances from 2012’s Phantom Antichrist appear in the guitar melodies throughout “World War Now”, paying homage to the veterans love of early NWOBHM as symphonic strains appear in the underbelly of the arrangement. Ventor’s ability to pound out those furious kick/snare combinations that match the intensity of the Mille/Sami dual rhythms and lightning sharp vocal roar makes you think of the late 80’s on a highlight like “Totalitarian Terror”, the mid-tempo switch up perfect for tribal audience activities.

Throughout there seems to be an added emphasis on furious riffing attacks, but the band also knows that thrash cannot survive on pure electricity alone- it’s the dynamic differences that separate the greatest from the wannabes. Check out the acoustic guitars and Middle Eastern elements that open the title track, as well the bagpipe additions to conclude the culturally-themed marching “Hail to the Hordes” – carefully thought through and executed in line to the themes at hand. The closer “Death Becomes My Light” at 7:26 ends the album on a thoughtful, epic note – the beginning strains very clean and ethereal, Mille’s voice maintaining distance before the Maiden-like rhythms take control, Sami executing some jaw-dropping lead work and harmonies that make me think of this song being a “Phantom of the Opera” for the group in 2017.

Sincerity, passion, talent, and follow through – Kreator embody all facets of these aspects in their songwriting, and at eleven tracks and 51 minutes Gods of Violence elevates the band’s revered status to another level – not so easy to do 33 years plus into a band.