Kreator – At the Pulse of Katipulation DVD (SPV) 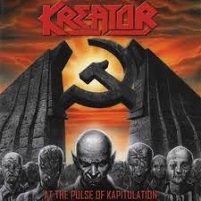 Kreator. Pre Coma of Souls, post Berlin Wall. Shot in early 1990, right after the fall of Communism, At the Pulse of Katipulation shows a very hungry and inspired Kreator, who were just getting ready to jump off the pure thrash bandwagon a mere two years later. However, we’re treated to a scorching live set with 15 of the band’s early classics in front of a rabid audience.

From a pure quality standpoint, Katipulation is professionally done, even though guitarist Frank Blackfire’s guitar is way low in the mix. The shots focus primarily on singer

/guitarist Mille Petrozza, who exudes raw charisma and vitriol. Drummer Ventor, notorious for his defiance of a metronome pounds away with unbridled intensity throughout the set, even getting his own drum solo, which is pretty cool.

Songs to make note of include “Under the Guilliotine,” “Flag of Hate,” “Riot of Violence,” “Betrayer” and perhaps Kreator’s best song

detailing the fall of the Berlin Wall and metal in East Germany is included, with some vintage shots of youngsters shedding off years of oppression to get a glimpse of their thrash heroes. Additionally, the Kreator “Horror” movie, Hallucinative Comas is worked into the DVD

set. Quite the find this is, Hallucinative Comas tells the story of the Coma of Souls cover subject Dr. Wagner and his descent into darkness.

dip back into the vaults and unearthing classic footage and this DVD/CD set (same tracklisting as the live show) is Kreator in its early 90’s glory. Across the board, this set screams quality, with a new nugget around every corner. Makes the wait until the band’s next studio album, due later this year a little more easy to swallow.