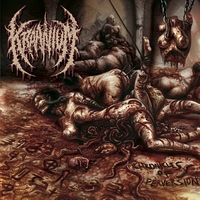 Slamming, brutal death metal…from Norway? Yes, Kraanium’s origin is a bit out of place amongst the black metal haven, but it doesn’t stop them from giving Chronicles of Perversion all of the genre’s usual bells and whistles. Fans of slam while no doubt slam this hard, but the rest of us…well, maybe not so much.

All of the genre tropes are displayed with pride on Chronicles of Perversion. Repeated use of serial killer documentary sound clips in the beginning of songs, low and practically gurgled vocals, requisite gory artwork featuring mutilated females and body parts, song titles like “Human Skin Fuck Doll” and “Fermented Uteral Mastication,” and of course, an abundance of chugging slam riffs. While the band’s clear love of slamming death metal is unquestionable (as well as their execution of it), there’s nothing to distinguish track to track along the 40 minute trip sans the different gory intros. The only place that moves away from the standard is the title track. “Chronicles of Perversion” is a slow, churning instrumental that is more of a moody headbanger than anything else, complete with a solo no less. If the band could get more of this atmosphere into the otherwise generic slams, it could elevate the band’s status past that of the plain.

Again, the slam-obsessed will find absolutely nothing wrong with Chronicles of Perversion. The slams come hard and fast, with the necessary heaviness behind them. While it’s a fun escape for a few listens, it shows its hand too early and too often – necessitating the listener to go and seek out another distraction after accomplishing the clear demolition Kraanium provides. 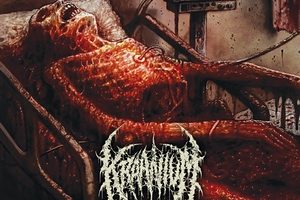