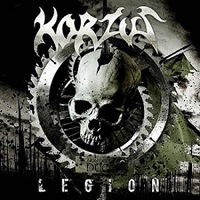 Digging deep into the well of South American thrash and you will find names beyond Sepultura, Overdose, and Ratao De Porao – as this Brazilian act Korzus formed in 1983 and have recorded five previous studio albums plus two live efforts setting the stage for this latest full length Legion. Vocalist Marcello Pompeu is the lone original soldier standing, unwavering in his commitment for the principles of thrash, dishing out speedy, harsh word spew amidst his bandmates equally robust riffs and tight transitional rhythm action.

The overall impression for these 13 tracks is favorable, the quintet very content to lay down accelerator oriented double bass material and thick, crunchy chord combinations along with lead breaks that are part energetic, part melodically inclined. Drummer Rodrigo Oliveira certainly lives for a tribal essence on a slow builder instrumental like “Apparatus Belli”, yet can propel full throttle in almost current Testament mode on the bulldozing “Lamb” (the bridge section a nice half-time tip of the cap to the almighty Slayer). The band understands that not everything can be up-tempo and memorable, so there are times that the slower, churning elements of “Six Seconds” or the triplet ripper “Self Hate” become standouts because of their unison bass/guitar/drum groove power, promoting future screams from the audience or a lot of limb damage in the pit.

Marcello’s phrasing and natural thrash vocal delivery pushes Legion beyond standard fare into the upper tier ranks. Check out “Bleeding Pride” and “Lifeline” as he is clearly in command, forceful in a clearer Schmier meets Tom Araya mold – holding out the right trailing notes but never too abrasive. I feel like the guitarists are keeping up with the young generation of newcomers, presenting an almost Warbringer-like charge on the circular “Vampiro”, and then throwing more of a mid-tempo Metallica wall of sound on the 7 minute plus ending title cut.

Add in the skull and sawblade cover art, and it’s easy to see Korzus gain a strong buzz with the fervent thrash maniacs. Possessing a little more musical muscle than your average act, Legion has the dynamic ability to gain plenty of airplay. 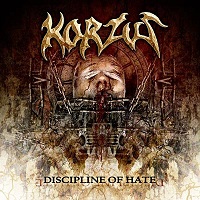