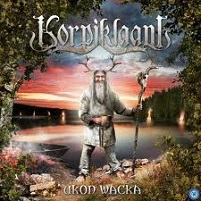 Far and away the first name associated with polka metal, Finland’s Korpiklaani have earned the right to churn out goofy albums at will. Since their 2006 breakout Tales Along this Road, the Finns have patented the accordion-meets-mead hall metal sound, and with Ukon Wacka, it’s more of the same beer-swigging, ho-down havin’, good time. With Finntroll twisting in the wind, Korpiklaani can pretty much churn out the same album and maintain their lofty status in the polka metal scene, whatever that is nowadays.

Opener “Louhen Yhdeksäs Poika” demonstrates some more muscle than heard on previous efforts, with ample amounts of double-bass to go with Jonne Järvelä’s constant tongue-twisting vocals. The man usually just barks in key most of the time, but his voice is jolly enough that it would make anyone want to imbide with him, which is the prevailing notion on “Tequila,” a song

that is not dissimilar to Sammy Hagar’s song of the same name. Perhaps the two bands should do a duet, eh?

The album tends to plod around the midway mark, which can primarily be attributed to the fact that Ukon Wacka is a virtual re-write of the band’s previous albums, although that doesn’t stop the mid-tempo romp of “Koivu Ja Tähti” or the zealous “Vaarinpolkka” from being worthy songs

When a band is so settled into a niche (and sound), any chance of deviation just isn’t going to happen. Suffice it to say, Korpiklaani churning out an album to rival the ultra-serious Finnish metal works of Amorphis or Sentenced is about as likely as these guys laying off the booze. Ukon Wacka is a prime indicator that sobriety (or a change in sound) is a long, long ways off.