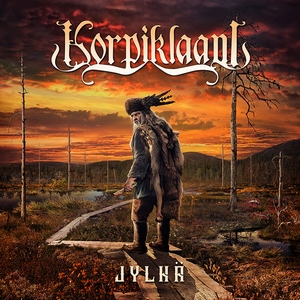 One of the better known metal acts that have championed a more fun and bolsterous side, yet unafraid to flex some more serious and majestic sounds when the right time arises, Korpiklaani know how to deliver all of the folky goods. The band’s eleventh album, Jylha, isn’t going to shake up anyone’s opinion about the act, but those who enjoy the band are going to have a hell of a lot of fun with it.

Just like with the previous release, Kulkija, a meaty runtime means that there’s going to be quite a bit of different things to expect. In that way, Jylha comes across as an incredibly solid set of songs. To the point where you could go through and identify things about each track, dissecting out its nuances. To point out just a few ones, the single “Leväluhta” has an almost reggae groovy vibe to its upbeat folk swings that all but beckons the listener to shake a leg or two. “Pohja” has a punkish immediacy to the riffing that pairs well with the band’s mostly uptempo vibes that gives it a more frantic tone despite the playfulness of the folk instrumentation. “Pidot” leans in a more seafaring vibe that grooves hard, a surefire track to get people dancing once the live scene starts up again. For those seeking less party vibes, the closing “Juuret” redirects the folk in a more majestic way – a perfect fit to finish off the album on with some more epic arrangements. Likewise, “Mylly” has a hint of melancholy to it to separate itself well from the more party-friendly tracks like the rollicking “Niemi.”

Korpiklaani continues to lead the charge with their brand of fun, partying tracks and side quests into more epic territory. It’s a combination that has been working for the band, with no need for a real change up. Instead, they continue to polish things up to gleaming quality, thus giving fans a real jovial and fun experience with some added depth to it for a stronger experience. Nothing to argue about if you have been following the band’s previous releases, as it gives out exactly what fans are looking for.