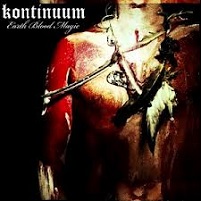 Oftentimes, we make pleas against geographical onslaughts, only because the droves that come from the country in question are usually a bastardized version of its originators. Unfortunately, the metal scene flocks to certain regions like flies in ointment, causing overkill and buyer’s remorse. Iceland has largely been left out of the discussion and for good reason – they have approximately three bands worth giving a fuss about: the little-known Potentiam, the quasi-known Solstafir, and perhaps the best known, Kontinuum. (It would be great if any one of these bands had normal spellings, too.)

Originally formed under the Pornea tag in 2001, the band took on the Kontinuum moniker prior to the recording of their Earth Blood Magic debut. It was good enough to catch the eye of Candlelight, a label that has displayed a knack for unearthing talent from not-so-common locations. Exotic Kontiuum’s sound is not, but it’s a fully-realized version of post black metal, sailing quickly past a lot of rudderless ships that occupy any sort of “post-” sphere. Therefore, the unassuming position band take amidst the European whirl and twirl of Agalloch and any number of would-be Katatonia dalliances makes Earth Blood Magic an easy, hardly forced listen.

Naturally, atmosphere is the carrot in front of the horse here, as the album’s nine tracks (which amount to a robust 55 minutes) all have the general sonic flotation devices to draw the line between brash heaviness and weightless melodic moments. And yeah, the band’s riffs are downright melodic, like on the blossoming “Moonshine” or doom-caked “City,” which is perhaps the weightiest number of the bunch. The album does lack a standout moment, but its nuggets are evident: “Steinrunnin Skogur,” “Strange Air,” and “Red” are gratifying, without question.

It’s too early to speak of a true “Icelandic sound,” yet the pulse and diversionary reactions of bands like Solstafir and Kontinuum suggest there’s something strong (and strange) brewing over there. Earth Blood Magic is hard to knock, laying the foundation for what is sure to be some kind of movement that will have us all by the ears…possibly balls, too.