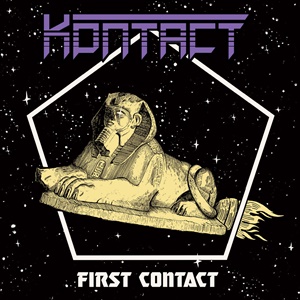 Featuring members of Traveler and Blackrat, Kontact is a new Canadian act from Calgary, Alberta that traverses a progressive meets traditional stance with left field quirks and sci-fi/ancient atmosphere and word content through this debut EP First Contact. Before even pressing play, the cover art conveys old school images between the galaxy, stars, purple band logo done in an almost IBM/computer-like font, and half animal/half Egyptian pyramid creature. And that is what you’ll hear through the four original songs plus fifth cover track – paying homage to another 80’s Canadian legendary progressive heavy metal band Sacred Blade, as this isn’t your average, straightforward trio rolling out this material.

Every song has an individual spirit that ranges all across the spectrum of the genre. When the band wishes to be slower and menacing, the heavier bass tones of “The Devil in Iron” shine through – vocally equal to the task in more of a rhythmic, twisty delivery that adds in a distant, distinctive whine not dissimilar to the best work of Snake from Voivod. Uplifting guitar riffs ready to tear up the highway make “Heaven’s Gate” a personal favorite – the drumming support right out of the 80’s Judas Priest school of simplicity. The shorter tribal-oriented fills and quieter keyboard support allow “City of the Pyramid” to penetrate your headspace in an alternate, progressive universe, the vocals again of another dimension, channeling at times the best of Alice Cooper and Snake – the thrash-oriented transition and wild solo break giving the arrangement an added dynamic peak to the record. Closing with “Fieldz the Sunshrine”, you may notice how similar the main guitar gallop and subsequent changes within put the Sacred Blade cover into Megadeth territory (specifically “Devil’s Island”) – hopefully allowing Kontact to represent unheralded acts from their home country to a new audience.

Time will tell if Kontact attracts enough interest to push up the ranks for future album releases. In the interim, First Contact could be that outer realm gem especially if you dig 80’s Priest and 90’s Voivod along with an analog-oriented production.