Konkhra – Alpha and the Omega (Hammerheart) 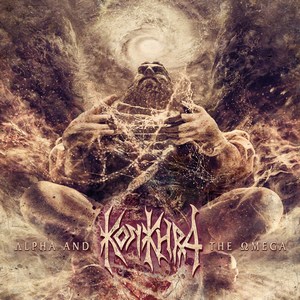 Building themselves up over the course of six albums in about a 20 year run from 1990 to 2009, Konkhra was all about the death metal and the groove. Though they were never really particularly purveyors of the style, the punch that combined death metal, thrash, and groove was something that held plenty of melody and kick. Ten years after their demise, the band has returned with all of their sound intact, at this point now offering something a bit more distinctive due to the changing of the times.

Alpha and the Omega, if you were to strip away at the excellent modern production (one that really pronounces the grooves), would sound like it came out of the later ‘90s/early 2000s in its death/thrash hybrid sound. That’s not a bad thing, as the Konkhra blend of material that seems to combine Gorefest with a side of Machine Head – it’s a bit like some death ‘n’ roll with its knack for hard-hitting grooves and straight-laced go-for-the-throat mentality. Konkhra spend much of their time in the mid-tempo to really augment their strongest element, but some more thrashy moments do have their time to shine, such as the throttling “Floodgates.” There’s no lack for melodies either, as they come in the form of grooves or some well-build guitar leads/solos (“Divine Wind”). The riffs are fun, which is a near-necessity for an album like this, and “Bow to Moloch” and “Sandblasted” stand as some great tracks to get your body in motion.

Konkhra are back and offer a much groovier take on death metal than many of their now current peers. Those who want their metal to be a bit chunkier are really going to enjoy this one from start to finish. Alpha and the Omega is a strong return that sets them up for a new generation to enjoy.