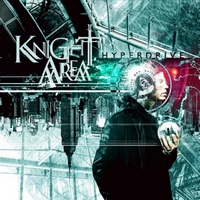 File this under “Older Dude Prog.” Essentially, the type of progressive metal that only has footing with the 35-and-older crowd, and is more than likely of little value to the younger punters who believe prog metal begins and ends with Between the Buried and Me and their various sound-alikes. For Denmark’s Knight Area, the fact of the matter is that they do play thoroughly melodic, song-oriented, and occasionally nood-ly prog, hereby giving them a platform for the Anubis Gate, Dream Theater, and Symphony X crowd, a trio the band samples from more than few times across Hyperdrive, their fifth album.

The fluffy vocal approach of Mark Smit is totally Euro; gentle and feathery enough to make a song like “Bubble” enjoyable, even if it’s as light as a feather in the chorus, so much so, that one wouldn’t be at fault if they mistook it for an 80s pop song. So combine Smit’s easy, non-confrontational vocals (his range isn’t too bad either) with the keyboard bops and biddies of Gerben Klazinga, and the predominant aspects of Knight Area’s sound are formed. Because the two have such a heavy hand in cuts like “Avenue of Broken Dreams” and the unnecessary piano ballad “Songs From the Past,” the guitars nearly become an afterthought, save for some quality harmony action found on “The Lost World.”

While some (including DR) may harbor on the fact that Hyperdive is pretty harmless in the heaviness department, Knight Area deserves a prog gander based upon many of the reasons listed above, namely the adventurous keyboard and vocal interplay. Granted, this stuff isn’t as muscular as one would like, and some of the melodies could be called into question for being too Euro pop friendly, but that’s what you’re signing up for a Dutch progressive band of this ilk.