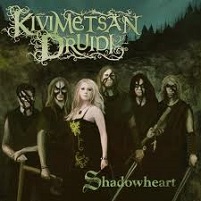 …they don’t die, they multiply. The year has seen a rash of bands emerge in this realm that gives weigh to the notion that this trend is sure to die out in no time. That’s just how it works – trends don’t last in metal. Of course, that’s not to say there aren’t any good Pagan metal bands (Eluveitie, Ensiferum, Suidakra instantly come to mind), it’s just that there are so many now, it’s getting hard to differentiate them all.

The latest entry into the fray comes in the form of Finland’s Kivimestan Druidi, who throw the ‘ole curveball by using a wealth of female vocals. Sounding like a watered-down Moonsorrow, mixed with the occasional extreme burst and hokey ho-down of a Finntroll, Kivimetsan Druidi do very little to establish themselves and in doing so, only further bog down this subgenre.

There are some meaty tunes here, like “Pedon Loitsu,” which contains some booming keyboards, the frenzied “Halls of Shadowheart” and valiant “The Tyrant,” which is a number that would make the very-overrated Turisas proud. Yet, the gallant and battle-tested hooks that the aforementioned bands of this ilk are so good at, are not evident here. Vocalist Leeni Maria has an average opera metal voice (think Tarja Turunen on a bad day), while the arrangements hardly evoke any speckle of epicness.

To further compound matters, it’s hard to decipher the band’s slant, you know – their calling card, if you will. Eluveitie employs a Celtic vibe, Ensiferum a classic Pagan vibe, so on and so forth, but Kivimetsan Druidi don’t have a point of emphasis. They’re just filling in the blanks. Or at least trying to.

Give us until mid-2009 and this stuff will already be beyond stale. And what’s troublesome is around that time, the bands of quality will be ready to release a new album and chances are, everyone will trash it. Ugh. Nothing much of value here, unless you’re looking to pad your CD collection. 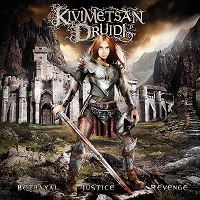