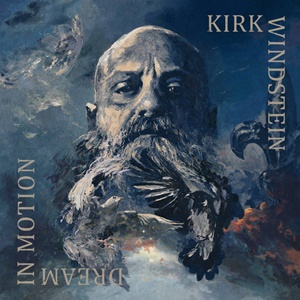 Crowbar leader Kirk Windstein spent two years recording this solo album Dream in Motion between tours and over the holidays. As one would expect, these ten songs showcase different angles to the man’s obvious passion and depth in heavy music, as a veteran of the scene he wants the world to understand a bit of versatility beyond his sludge, doom-oriented metal ways. Choosing to handle all vocals, guitars, and bass along with drumming/effects handled by longtime friend/producer Duane Simoneaux, it’s awesome to experience a more album-oriented rock outing that is still emotional, soulful, and heart-felt.

The differences in approach and sound come from more of an emphasis on cleaner/clearer guitar tones that don’t sacrifice the heaviness, as well as Kirk’s vocals which dial in similar values with less of the grit and dirt that his main band emphasizes. Delay mechanisms allow the slower chords and calmness for “Hollow Dying Man” to be an early standout, channeling a bit of Type O Negative atmosphere. Many times you’ll feel the need to sway to the tranquil, circular clean guitar notations and proper bass/ drum supplementation – as “Enemy in Disguise” and “The Healing” provide two examples of Kirk’s exploration into that dynamic. Don’t get me wrong, there are plenty of heavier moments where his Sabbath-esque / Thin Lizzy love rears itself to the plate – “Toxic” and the title track illustrate that old school metal affinity. Choosing to end the album on a cover for Jethro Tull’s “Aqualung” – it’s well within Kirk’s magical vocal range, and the twists and turns of the arrangement giving the record the perfect sendoff, even as the distant vocal effects, piano, and electric mechanics flesh out the song in a special way.

A throwback to the man’s musical foundation, Dream in Motion channels its drive and energy into those far reaching pastures where you can still rock and move people – just in ethereal, calmer compositions. And those that love Kirk will enjoy that alternate universe just fine.