Kingdom of Sorrow – Behind the Blackest Tears (Relapse Records) 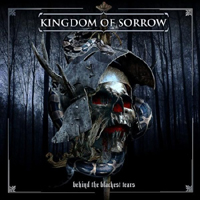 One of the rare instances when a pairing does in fact, sound like the sum of its parts, Kingdom of Sorrow return with their second effort, Behind the Blackest Tears. The combo of Jamey Jasta (Hatebreed) and Kirk Windstein (Crowbar/Down) complement each other well, pulling at both of their respective musical styles and at times, it comes across as skull-crushingly killer. Other times, it’s a wonder why they didn’t keep their own devices.

The monster swamp groove Crowbar made a career out of is on full display during opener “Enlightened to Extinction,” as is the melodic pummel (think 1998’s grossly underrated Oddfellows’ Rest) on “God’s Law in the Devil’s Land.” Some tasty vocal trade-offs between Jasta and Windstein ensue, and it’s where KOS work best. Jasta refrains from his trademark hardcore bark, while Windstein’s aching croon meshes well with the molten riff-action presented throughout.

Beyond that, Behind the Blackest Tears gets jumbled with a slew of samey numbers, save for the ballad-like “From Heroes to Dust.” Not really that big of a surprise this happened, as both Crowbar and Hatebreed have a glaring tendency to virtually re-write themselves on their regular full-lengths. Such a thing happens when a limited sound is parlayed; you can’t go any further than what both bands have already done and to combine it here, doesn’t take away from the glaring limitations of both bands.

A stint on this summer’s Ozzfest should give Behind the Blackest Tears a nice little promotional push, although we’re curious to see how the band fares in front of a crowd that is more familiar with “I Will Be Heard” and “Stone the Crow” than the regular offerings from Kingdom of Sorrow. One can already imagine sun-drenched punters clamouring for songs from Hatebreed or Down (maybe Crowbar), but such is the conundrum with this project. Perhaps they’ll throw the crowd a bone or two.