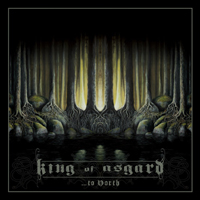 A few years ago, you couldn’t walk outside to fetch the newspaper without stepping on a Pagan/epic metal band. The style seemingly got worse – and more outlandish – by the minute, which actually might have helped matters. Labels stopped signing every band brandishing a sword and the cream rose to the top, and while we won’t try to detail who is atop the epic metal heap, King of Asgard are making a seriously play for it.

On their sophomore …to North, the Swedes (who recently expanded to a quartet thanks to the addition of second guitarist Lars Tangemark) follow the template laid out on their Fi’mbulvntr debut. Essentially, the band stays away from orchestral and symphonic movements, preferring to let a steady stream of muscular Bathory riffs to do the talking. Bear in mind that this is hardly black metal – it’s more like death metal with spirit and a knack for storytelling, but with enough guile and adventure

Wasting no time, “The Nine Worlds Burn” is off the races with a surging main riff, not terribly dissimilar to Enslaved’s mid-90’s era. The speed is supplanted by a thundering groove, like hooves clanking on a battlefield (use your imagination

). Karl Beckman never deviates from his man-roar and it serves the album well, especially on iron-clad cuts like “Gap of Ginnugs” (by far the most Viking of the album’s ten songs) and “Plague-Ridden Rebirth.” Furthermore, KOA is never at a loss for a brazen guitar construct, or a hard-lined melody, none of which stray into peppy territory.

Displaying a fundamental quality all good Pagan/epic metal bands have (such as Ensiferum and Tyr), King of Asgard are everything the style should be and more. …to North doesn’t suffer from the debilitating and attention-grabbing mindset that other albums of this ilk do. Rather, it goes about its business, gets the job done, and goes home…probably carrying a decapitated heads by the hair, too.