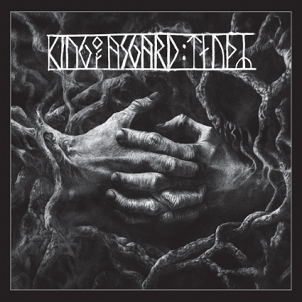 After three impressive albums with Metal Blade, Swedish blackened Viking outfit King of Asgard have moved over to Trollmusic for the release of Taudr. Such a move could be a detriment to the band’s visibility (not to discount the merit of Trollmusic, however), but it hasn’t had much of an effect on King of Asgard’s tunes. Taudr, like its predecessors (Fi’mbulvintr in particular) is a burly, effusive outing, one that continues to assert King of Asgard as one of the most extreme and unflinching practitioners of Viking metal.

Operating without a lot of the bells and whistles as their contemporaries, KOA’s riff-based approach puts the band on attack. Opener “The Curse and the Wanderer” is a rollicking affair that volleys between blinding black metal riffing and graceful chord mechanisms, not terribly out of line to what Bathory was doing 25 years ago. The Nordic and triumphant spirit of “Death and a New Sun” coupled with the desolate, if not slightly melancholic feel of “…for the Fury of the Norse” demonstrate (again) that KOA are well aware of the balancing act that is necessary to execute triumphant Nordic metal without working down to the lowest common denominator.

Certainly not as long-winded as their previous efforts, Taudr is surprisingly rounded out with a cover of Mithotyn’s “Upon Raging Waves.” Considering Mithotyn’s was mainman Karl Beckmann’s previous band, the song could be considered as a way of paying tribute to the past. Something like that. Nevertheless, Taudr, in its tightness and brevity, is another spirited display of metal from the north. King of Asgard may not be as high-profile as Amon Amarth or Enslaved, but we can use a lot more bands like them who are willing to stay in the trenches and remain true-to-form.