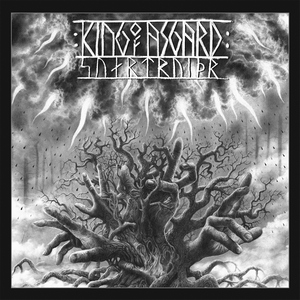 The first bit of new music we’ve gotten from King of Asgard since 2017’s taudr, it seems that time has not weathered the sails of this Swedish Viking metal act. The band’s fifth release overall, they’ve laid plenty of groundwork in this particular style – you have a strong idea of what you are going to be getting, particularly in relation to last release taudr. But there’s a bit more music here this time around, and the band has certainly continued to dress things up with all of the little details to make svartrviðr an excellent journey to take.

The merger of the Viking, death, and black elements have been what the band is all about for quite some time, and this comes across as more of a refinement than anything else. A number of lengthy tracks (many in the 7-9 minute range) that offer some ebb and flow with some biting melodies, moments of all-out grace, and of course, some seething aggression to go around. No full on extremity per say, but a controlled level of energy certainly comes into play with songs like “hæimr” as they switch between longing melodies and punchy, blackened riffs. “kvikr” exudes this as well, moving from a gentle, acoustic beginning into more furious territory. But as one of the album’s lengthier tracks, it also does a nice job of veering back into serenity and using those juxtapositions to keep the music launching perpetually forwards. Those blackened melodies do feel as if they are the strongest asset here, whether they are played at top speed or as a more atmospheric touch (see the title track), they always tend to stand out and be the focal point, and for good reason.

King of Asgard continue to raise their swords high with svartrviðr. The slurry of melodies within the Viking/black/death formatting keeps the music at its strongest and continues to showcase King of Asgard in peak form.