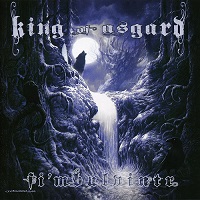 All has been relatively quiet this year on the epic/Pagan metal front (thank you, sweet Odin), which could be why King of Asgard’s relatively by-the-book take on said style works in spades. It’s the sort of no-frills, to-the-gut/to-the-Viking-helmet angle that has worked in the past for Amon Amarth and early Enslaved, which is where KOA falls in between. In fact, Fi’mbulvintr is the type of album we could have used last year when this shit was getting out of hand.

Operating only as a three-piece (a rare thing in this realm), KOA rely heavily on singer/guitarist Karl Beckmann’s speed-picking intensive riffs and brazen chord choices. Opener “Einharjar” is proof positive of this, finding that perfect crawlspace between Tyr and early Amon Amarth. There’s no lack of spirited melodies either, something album standout “Vamod’s Tale” brings to life, as does “Never You Will Know of Flesh Again.”

When most albums of this ilk tend to sputter out is around the midway portion, but Fi’mbulvintr manages to keep its legs. Whether it’s via the blast-happy “Wrath of the Gods” (more sanguine melodies), or pounding “Brethren of the North” or even the triumphant “Heroes Brigade,” KOA clearly has the songwriting know-how to take a played-out style and make it fresh.

The morass and glutton of bands in the epic/Viking field could end up hurting an ensemble like King of Asgard, only for the simple fact they’ll be guilty by association. Fact of the matter is, Fi’mbulvintr is a well-executed, memorable release, one that moves around the pitfalls created by its contemporaries and in the end, emerges victorious. Isn’t that the goal for all of these bands?