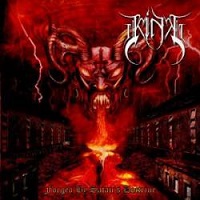 “Kill the Posers Like Fucking Christians,” eh? So that’s how you want to play it? “Poser” is such a broad terms these days; it’s almost like “emo,” but not as pitiful-looking or pitiful sounding, for that matter. Sometimes Blistering wonders if bands really think through the songtitles they conjure up. What if someone’s mom is a poser? That wouldn’t be cool. Heck, even yours truly was once called a poser because he wore a plain white t-shirt to band practice. You just can’t win sometimes. (Note: A Sepultura Beneath the Remains shirt was worn typing this review. There’s no way you call that poser-worthy.)

At any rate, the sophomore discourse Columbian black metallers King develop over the course their 11-song Forged By Satan’s Doctrine effort is no stranger to the fields of death and black metal. The sharp edges in which the band presents their music is dulled almost immediately because of instant parallels to Krisiun and Deicide. They’re like Krisium from a technicality standpoint, minus the freewheeling nature that the Brazilians possess; and they’re like Deicide from a lyrical standpoint because they too would be dumb enough to name an album To Hell With God.

King’s Columbian locale more than likely prevented them from achieving an audible production job, for this thing has the really annoying kick drum pitter-patter than Morbid Angel’s Pete Sandoval was so fond of at the dawn of the last decade. Therefore, it’s no surprise that the constant churn of double-bass and full-on blast beats are the basis for the jams kicks out, as the furious and untamed “When the Walls In Heaven Turn Black” manages to whip a storm with minor melodies, while the even faster “The Ruthless Attitude of Evil Sobervia” even tosses in some Voivod-worthy chords. Nicely done.

One can appreciate King’s unhinged approach to death/black metal. There’s nothing that holds down Forged By Satan’s Doctrine, that’s for sure. Therefore, it’s probably appropriate that King’s lyrical bent upholds everything that is feral, evil, and comic book-like about our genre. It wouldn’t feel the same if it were done any other way…