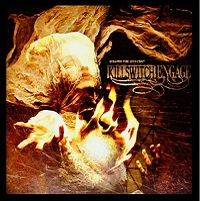 After the almost universally positive response to the, to date, only Times Of Grace record, it really shouldn’t have come as a surprise to anyone when Killswitch Engage announced they’d brought Jesse Leach back to replace Howard Jones. Having seen them at Download 2012 in England with Leach out front, it was obvious he’d slotted back in perfectly, so anticipation was high for the new album.

Time it seems, though, has moved on. Or, to put it another way, the style of music that Killswitch Engage play has been so overdone in the past few years that even though the big boys are back in town, they don’t stand out anymore like they once did. The first two releases from Disarm the Descent didn’t set the world ablaze. Neither “In Due Time” nor “New Awakening” had anything wrong with them, they just didn’t have the killer spirit or edge that people were expecting. In short they sounded like your standard KSE songs.

Sure, there are some massive riffs on display here, with brash opener “The Hell In Me” getting off the mark very well initially, but it’s not until just before the half-way point and the aptly-titled “The Turning Point” that things start to pick up. That track begins with some djent-y Meshuggah-style guitar riffs and humming bass over a driving drum beat before fine ringing fret-work, echoing in the background leads into the choruses. Here the focus on the mostly heavier and rasping vocals is definitely a positive.

“All That We Have” keeps the foot on the pedal, beginning with a furious bellow and tearing off into staccato riffing and neck-snapping drums, proving there’s still gas in the tank, but then it’s back to the generic stuff with “You Don’t Bleed For Me.” Elsewhere, you get some interesting things happening during “No End In Sight,” “A Tribute to the Fallen” and “Always,” but there are no big surprises or breathtaking moments.

Sure, it’s great to have Jesse Leach back in the fold and you know they’ll slay live, but apart from a few stand-out tracks, this isn’t a must-have. Anyone who was hoping for the new Alive or Just Breathing will be left wanting.