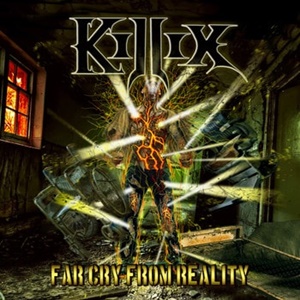 These are fruitful times for all genres in metal. Usually the listener with a few keystrokes and research can discover a few new EP’s/albums either from trusty labels or the DIY route to suit their aural tastes. Hailing from Los Angeles and originally together since 2008 under the slightly different Kylix spelling, Killix is a quintet with several tours under their belt prior to the release of the latest album Far Cry from Reality. And given no previous exposure prior to these ten songs, it’s safe to say that this quartet possess an advanced mixture of progressive thrash metal that could help them reach to both sides of headbangers and schooled musicians alike.

The guitar work from Warren J. Williams and Matt Herrera climbs and ascends through challenging progressive licks and riffs in spots, elevating “Tempest of the Unrest” to that Riot meets Destiny’s End territory even as the tempo can be semi-thrash and pounding. Bassist Daniel Schell throws down some fluidity a la Jason Newsted in the energetic “Rise of Kaiju”, Warren’s measured rasp vocally riveting against the exotic-flavored thrash riffs. Killix have the ability to throw down the heads-down, crunchy Bay Area nuances that put Slayer and Exodus on the map (check out the mid-tempo transition before the lead break for “Show Me”), but for the most part pile on the challenging power/progressive style guitars and complementary rhythm section work that synthesizes classic Maiden, Flotsam & Jetsam, and other offshoots. Those who love melodic lead breaks and engaging instrumental section interplay will have plenty to digest as well – although no song exceeds 6:28. Diversity also comes up for the ballad “One of Us” – which works to showcase their thoughtful side even through the strained delivery Warren employs, as the clean riff mechanics seamlessly transition into another momentum building lead break.

Proper production and great cover art top off a DIY release that by all rights should see Killix gain favor from critics and fans who want something above the typical third generation of rehash thrash.